The ‚Instrumental Beats‚ Spotify playlist is taken over for the first time in 2020. It’s a great pleasure for me that Nils Hoffmann presents his 10 best instrumental tracks one week after the release of his fantastic debut album.

I am happy for two reasons. First of all, Nils is an outstanding artist. No, he definitely isn’t a insider tip for fans of Deep & Progressive House anymore. Whether as a solo artist, in collaborations with artists like Ben Böhmer or as a remixer. He knows how to surprise and impress. As influences he mentions the music of Trentemøller, Paul Kalkbrenner and Apparat, which in my opinion is partly to be heard. But Nils has developed his own style with which he attracts attention and inspires many people. 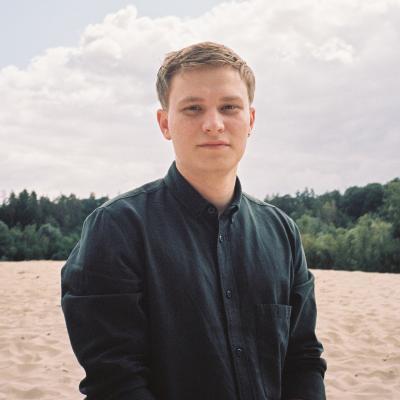 The other reason is that Nils plays a major role in the existence of the ‚Instrumental Beats‘ playlist. His track ‚Balloons‚ (which is still one of my favourite tracks) was one of the first tracks on the playlist. Contrary to my musical taste at that time, this track made me realize that music produced with synthesizers or samplers also has soul & warmness. Many thanks for that! But I‘m very happy that his music isn’t only popular on Klangspot playlists. No, his tracks are also featured on big Spotify playlists like Electronic Rising, Truly Deep House or Afterhours. Well deserved I think.

Eight years after ‚Verwunschen‚ Nils released his debut album ‚Once in a Blue Moon‚ last week (Poesie Musik), which was introduced by five singles during the last months. Who thought the album would be only a summary of the singles, was wrong. Besides the known tracks the album contains further highlights like ‚The Clouds Silver Shining‚, ‚Parachute‚ (a collaboration with Max Joni) or the amazing intro ‚1.16699016 x 10^-8 hertz‘, which was already used in the ‚Anjunadeep Edition 285‚ mix.

With the new music in his pocket, he will tour in 2020. His fans in Down Under can be happy in advance. Three gigs, where Nils can be heard as support for Ben Böhmer, are fixed. Check out the other tour dates. Let’s hope Corona doesn’t screw up the plans. Follow Nils on Facebook to be informed about the latest status.

Thanks for your rating! 🙂

We are sorry that this post was not useful for you!

Let us improve it!

Follow Klangspot Recordings on Instagram to stay up to date with all new releases and playlist updates.
Follow on Instagram
Playlist Submission
Manage Cookie Consent
To provide the best experiences, we use technologies like cookies to store and/or access device information. Consenting to these technologies will allow us to process data such as browsing behavior or unique IDs on this site. Not consenting or withdrawing consent, may adversely affect certain features and functions.
Optionen verwalten Dienste verwalten Anbieter verwalten Lesen Sie mehr über diese Zwecke
View preferences
{title} {title} {title}